Happy Friday!  Did you have a good week?  It has felt extremely long.  I think the load shedding just makes our days so long.  I’m not sure if it is going anywhere soon so we will just have to get used to it.  At least I am prepared.  I am so glad it is weekend though.  I need to do nothing for a day.  Do you have weekend plans?

Today I am showing you 4 of the Essence – Cosmic lights polishes.  I will be honest, when I bought the glitter on, glitter off polishes I saw these at the same time and I wasn’t really intrigued enough to buy them.  I did go back afterwards and looked at them again.  I still wasn’t sure if it was worth the purchase but the holo glitter in the bottle convinced me to give it a try.  I just took 4 (Tuesday stamping and all that) and my Dischem only had 5 on the shelf anyway.  Once again, I have something to say applicable to all of them so let me get that out of the way first.

All of these (that I have) are metallic / chrome polishes with holographic glitter.  All of them are super opaque and could be one coaters.  They also apply really well.  It does dry with a funny finish.  At first I thought it was bubbling so I redid it but this happened almost instantly.  I then figured out it is the holographic glitter that causes these little bumps in the metallic polish.  Because it is metallic/chrome it shows the ‘imperfections’ really easily.  When I applied topcoat it seemed to help a little bit but once I was finished I got to thinking.  I wonder if the finish of these is meant to be similar to the China Glaze – Crinkled chrome polishes.  I don’t have any of them (yet) so I couldn’t compare but that might be what it was meant to be.  Either way, it’s a little disturbing at first but you soon get used to it and actually barely notice it unless you’re looking super closely.  I did do my swatches with topcoat.  As I said initially I thought this was solving a ‘problem’ but I suspect now it might be part of the effect.  Let’s get to it. 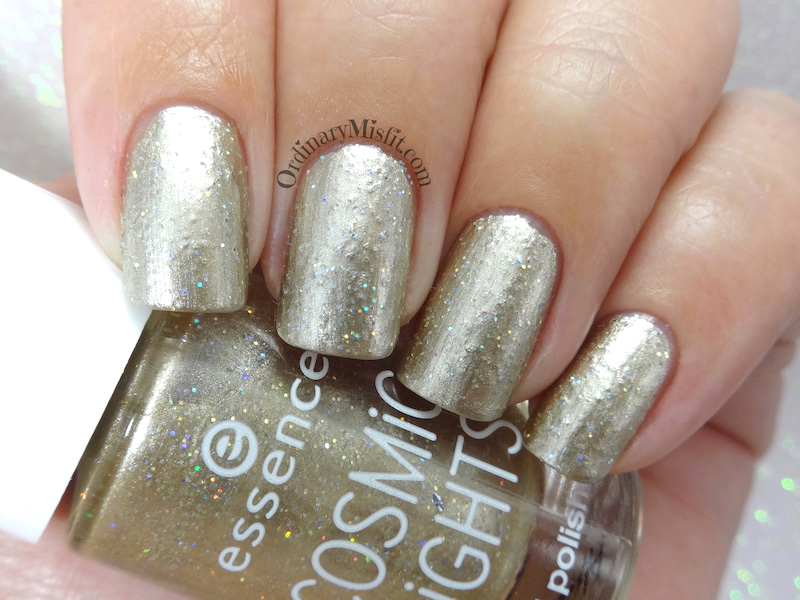 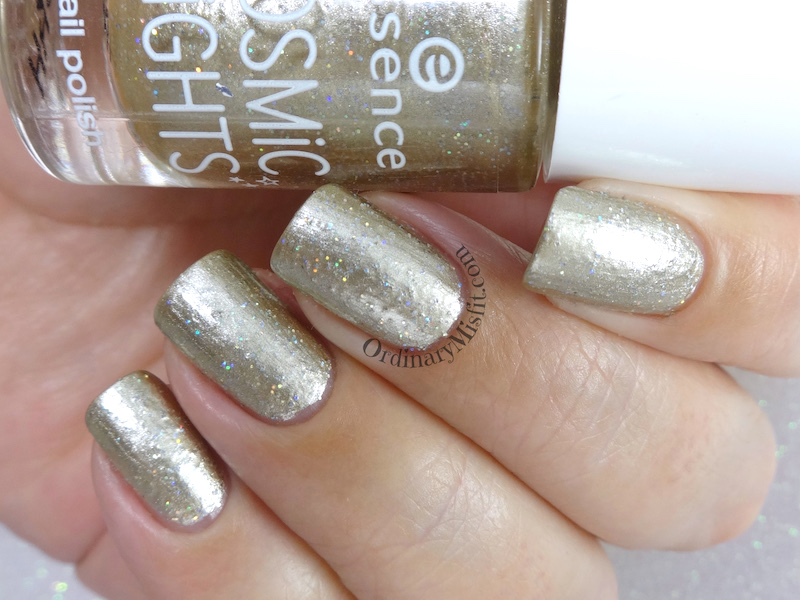 This is 2 coats (could’ve been one) with topcoat.  This is a gold with quite a lot of holographic glitter in it.  This is my favourite one.  I like the tone of gold but I also think it has more glitter than the others so it just sparkles like crazy.  It makes me feel festive. 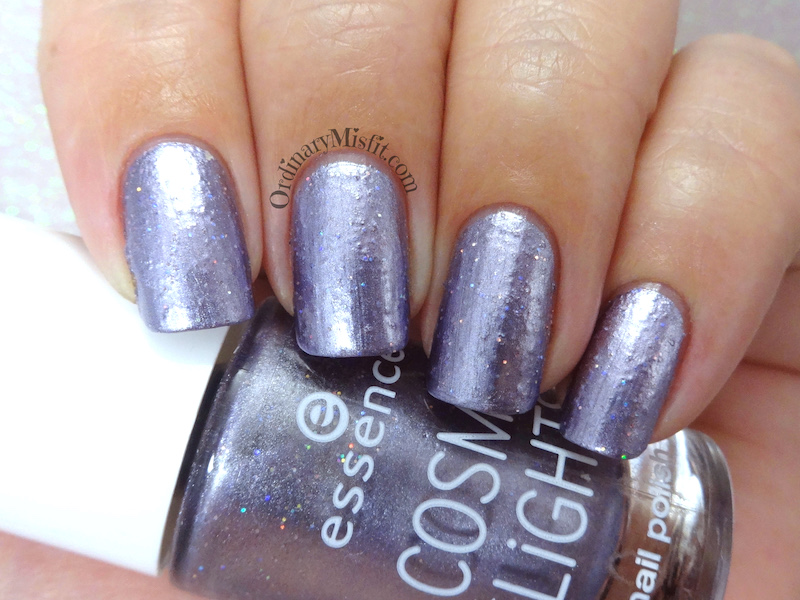 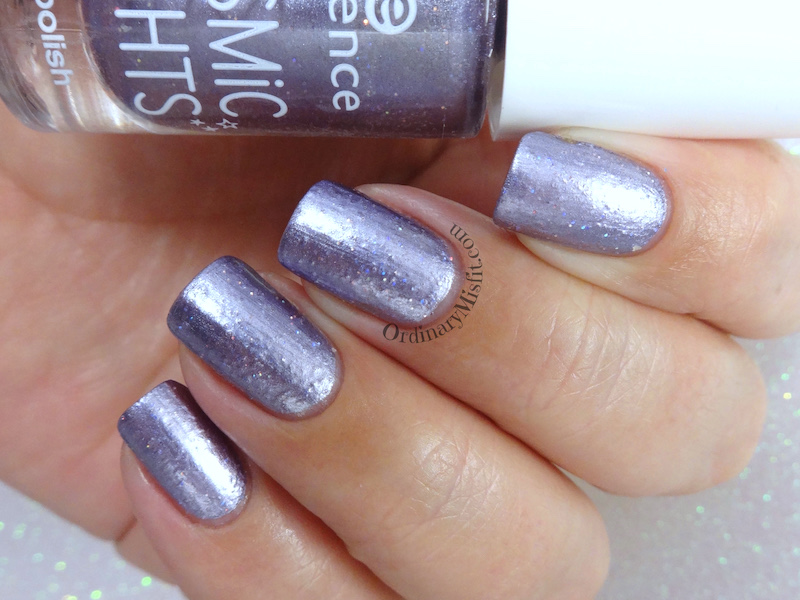 This is 2 coats (could’ve been one) with topcoat.  This is a purple metallic with the holo glitter.  I felt like this one had considerably less glitter than the gold one (you can see this when you look at the bottles too).  It does have quite a bit of the ‘texture’ which is what initially led me think it might be more than just the glitter texture.

Essence – To the moon and back 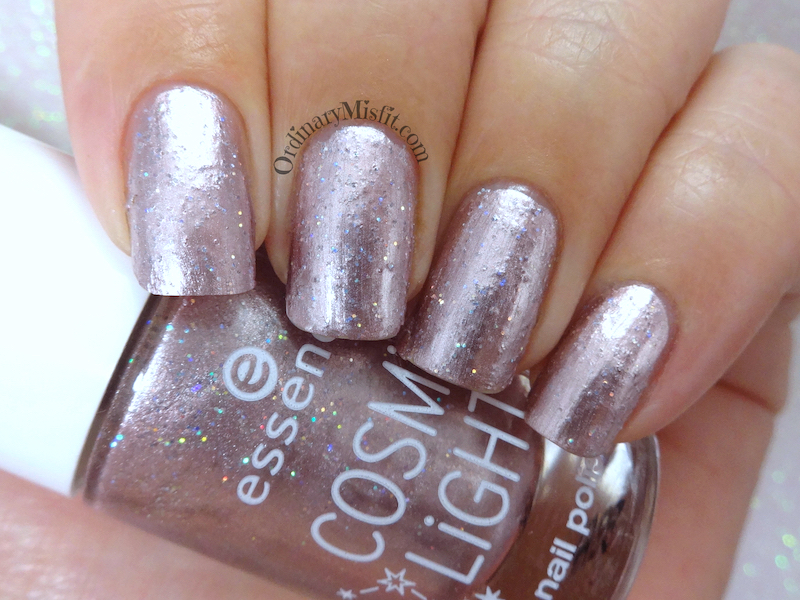 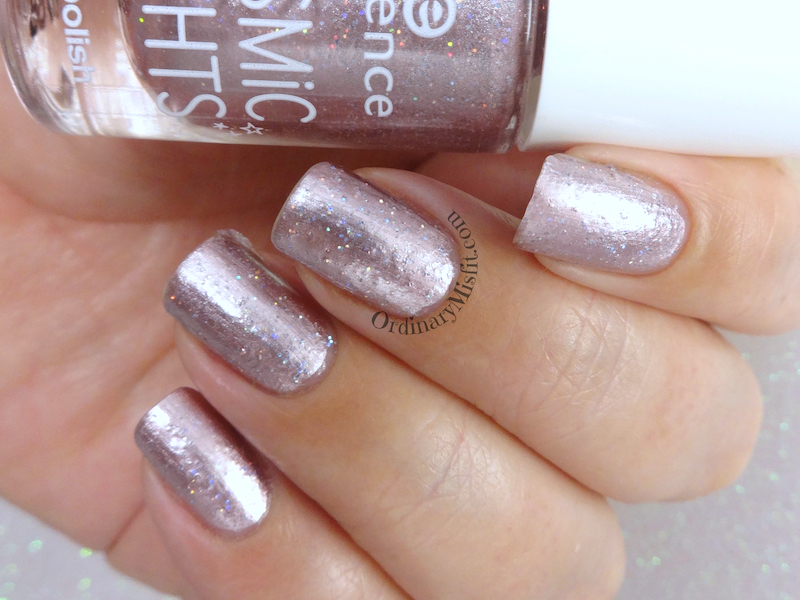 This is 2 coats (could’ve been one) with topcoat.  This is a dusty pink metallic base with holographic glitter. I think this one showed the ‘texture’ more because of the colour of the polish but the pink was also much more chrome.

Essence – Up to the sky 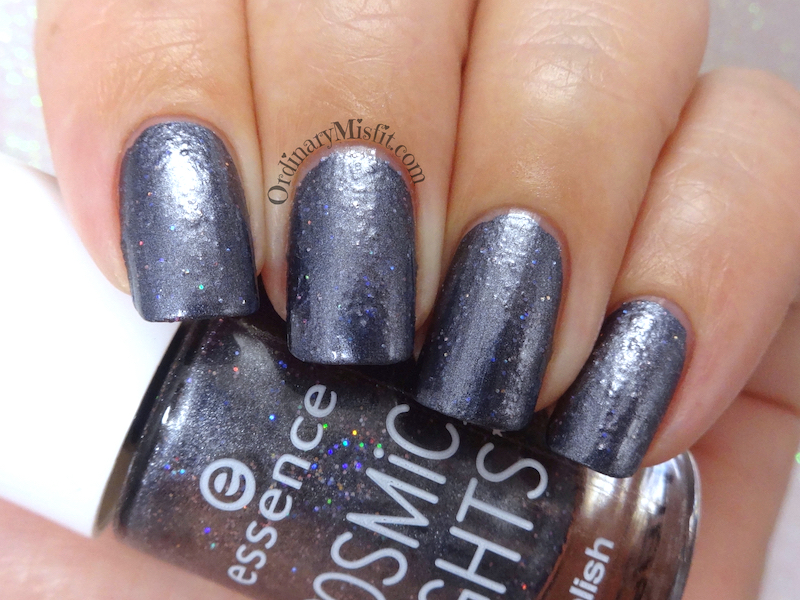 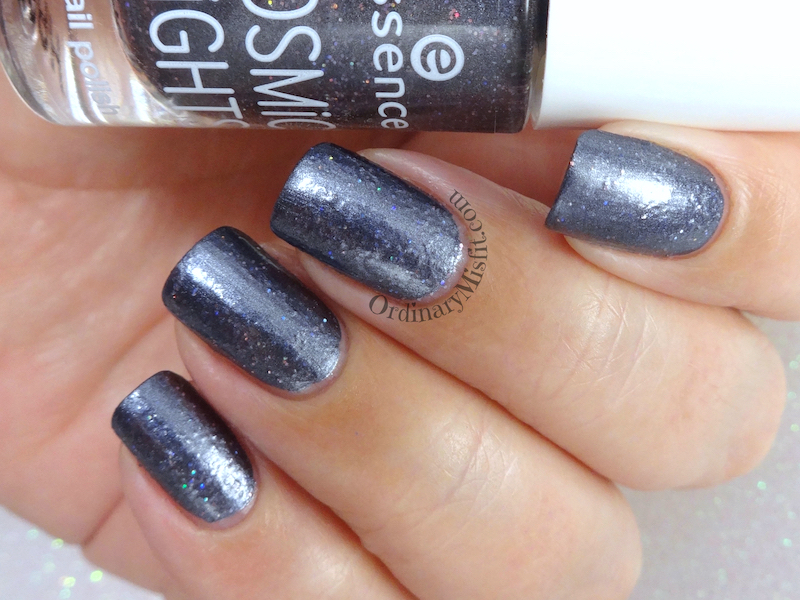 This is 2 coats (could’ve been one) with topcoat.  This is a darker blue metallic with holographic glitter.  I quite like the colour of this polish but I wish it showed off the holo glitter just a bit more.

What do you think?  Do you think the bubbly texture is caused by the glitter in the metallic polish or do you think it is on purpose? Maybe an effect?  Which one do you think you like? The gold one (Cosmic star) is definitely my favourite.  Like I said, the ‘texture’ isn’t as obvious if you’re not looking for it and the metallic polishes are very pretty.  I think if it had more holo glitter it would be magical.  If the ‘texture’ isn’t on purpose I don’t think it would be as visible with more holo glitter either.  Or maybe the holo glitter as a topper so you could layer more or less on top depending on what you wanted.  I’m still undecided about this collection.  I like it, it looks pretty.  The glitter is beautiful.  I just don’t know about that ‘texture’. It’s not horrible and it’s not off putting.  I just don’t know if it’s meant to be.  Let me know what you think.

PS:  These will feature in the next Tuesday Stamping as well.